The only thing to fear is fear itself … or balloons, or rubber duckies, or sponges, or colored noodles, or nail polish, or bubbles … 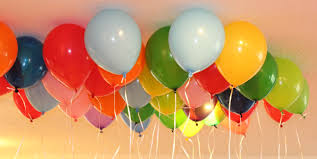 The first time we saw it, we laughed. It was Kymee’s first birthday, and I was blowing up balloons – she shrieked in horror and ran away. Call me cruel, but I laughed when she ran as fast as she could away from the balloons and stared at them as if they may attack her at any moment.

She had a rubber duckie birthday party, so I was surprised a month later when I got a cute rubber duckie with a boa and princess crown for her and instead of squealing with delight she ran the other direction crying. The duckie sat in the middle of the living room and Kymee  never took her eyes off the duckie as she skirted the edges of the wall to navigate her way around it.

Then there was the time I picked up a packet of the sponge animals that grow in water. “Won’t Kymee love these,” I thought. Andres put them in water and as they grew Kymee’s eyes grew too and became cloudy. She began screaming, and ran into my arms to save her. Andres picked one up and said, “See, it won’t hurt you.” She squeezed my neck tighter and buried her head in my chest. Andres placed the sponges on the border of his bedroom door and Kymee would not even think twice about entering his room. Smart boy.

We never know what will trigger her fear. This week we’ve experience three phobia triggers. That’s a lot for a week.

We had a family Valentines Party. I made a sensory box for the toddlers. I colored spaghetti noodles with red food coloring added a few pink and red toys, spoons and measuring cups. The boys loved it. Kymee touched it and ran away shaking her head. She wouldn’t come into the kitchen until I removed the sensory box.

Kymee brought me nail polish, which in the past she has been fearful of. I was surprised when she indicated she wanted me to put it on her. She sat perfectly still as I painted one set of toenails green and the other five piggies blue. I told her to sit still as they dried. She giggled as I blew on her toes. Mission accomplished. I sat her on her feet on the floor at which moment she looked at her toes and started screaming. I should have been filming for “America’s Funniest Videos” as Kymee proceeded to kick her feet trying to fling the color off her toes. She stomped and tried to brush the color off with her hands all while screaming at the top of her lungs. If you have ever seen someone try to sling their toes away from themselves, you have to admit it is worth the $100,000 grand prize.

Kymee loves bath time, so I made a special Valentines Bath. Pink food coloring, bubble bath, foam hearts and silk rose peddles were added to the tub along with bathtub paints. I put Kymee in the tub. She froze. Fear creeped into her eyes, and she started crying. Why? She’s played with paint in the tub. She’s had colored water. She loves playing with the foam shapes. I picked up some bubbles in my hands, she cried more. The bubbles. She’s scared of the bubbles.

At face value, each incident is funny. It’s funny to be frightened by such trivial things, isn’t it? We’ve all laughed at the absurdity. But who wants their little girl to be frightened of the world? It is a mom’s job to protect their child and make her feel secure. I fail time, and time again. It is impossible to avoid an unknown trigger.

I’m going to get technical on you now – hang tight.

I remember when Kymee was little and having screaming fits (which she still has – less often but more violent). Her geneticist told me it was possible that the part of her brain that allows her to self-regulate, may not have developed properly in vitro. This week I was reading a book on how children’s brains developed (that’s what the nerdy me does for fun) – and it clicked.

The book explained that if the mother is anxiety-ridden or in great stress while pregnant, her body sends out stress hormones and set patterns for her developing fetus’s brain “that ‘wire’ the unborn child for this automatic defense response diminishing the functioning of the high brain … (The brain in the unborn child than is geared towards) protection and defense, rather than being free to move toward intellectual curiosity and exploration”(Oppenheimer). Since Kymee’s mom was bipolar, and was prone to outburst of rage, is it possible that Kymee’s brain is wired for defensiveness – she sees things differently than I do? – No specialist’s evaluation, just a mom in deep thought.

The geneticist says that after Kymee turns three she can send her to behavior specialists who can help us teach Kymee to deal with some of her issues. I hope the fears are a part of that. It’s unthinkable to have her go through life with possible fears creeping around every corner.

Since Princess Kymee can not fight the fear dragon herself, it’s up to me, her mom to be her knight in shining armor and fight the demons for her. So I’ll duel with balloons, banish over-dressed duckies,  exterminate sponges, discard colored noodles, cover piggies with socks, and scoop bath bubbles from the tub into the toilet (does this double as cleaning the toilet?).

I invite you to journey alongside me on a road less traveled … an adventure, inspired by a waldorf education, training my daughter to use her heart, mind, soul, and strength to love the Lord.