Once upon a time there was a Flower Fairy named Kymee.

An evil speech monster stole all Kymee’s words. Kymee couldn’t use her words to name all the beautiful flowers around her.
Then all of a sudden, a Fairy Speech-mother appeared. She played and sang to Fairy Kymee and tried to help her find the words which the monster had stolen. But she couldn’t do it alone. 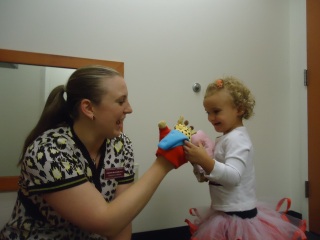 Each pop-cycle person, agreed to give Kymee one word or two.

Kymee dressed Grandma popcycle person on her magnetic puzzle, and Grandma gave  her the words “shirt” and “skirt” and “shoes”

As the popcylcle people rested on lily pads, magical frogs transported Kymee from pad to pad.  And each gave her a new word.
She hopped from Grandpa and Grandma, Abuelo and Abuela to Daddy, Mommy and Yaya. She rode on the frogs back as she visited the lily pad of Baba, Mimi and Eli. She leaped to Carlos, Lydia, and J then to Kenny, Sissy and Trent, and finally she came to land on the pad of Uncle Mark and Auntie Kim.
With each new hop, the magic of the monster began to wear out and the Flower Fairy began to find her words.

The Fairy Speech-mother put Kymee into a deep sleep, and returned the popcycle people to their rightful place among the flowers. The monster was overcome for another day.

When Flower Fairy Kymee awoke, she had new words to use and was happier then ever before.

The end, until the Speech Monster roars again.

I invite you to journey alongside me on a road less traveled … an adventure, inspired by a waldorf education, training my daughter to use her heart, mind, soul, and strength to love the Lord.